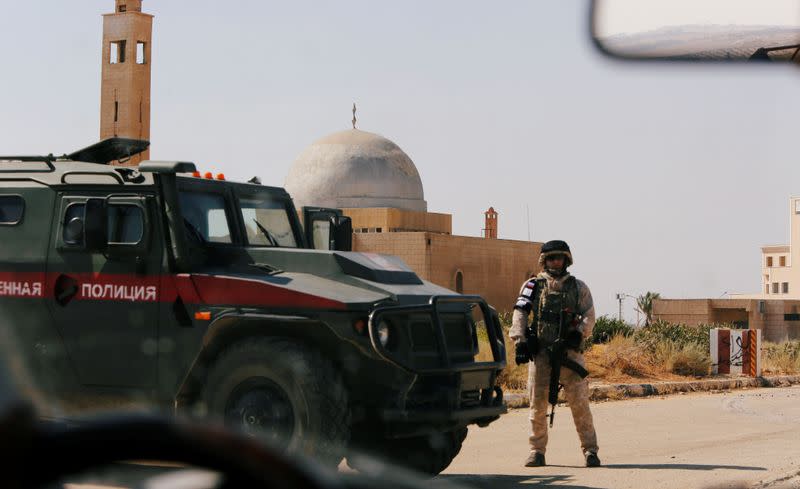 AMMAN (Reuters) – Russian forces traveled to an opposition enclave in the Syrian city of Daraa on Tuesday to try to avoid an army assault on a stronghold that has since challenged state authority. its resumption three years ago, according to witnesses, locals and military sources mentioned.

Their entry put an end to shelling by pro-Iranian army units that surrounded the enclave, where protests first erupted in 2011, and attempted to storm the region on Monday during the latest campaign to force former rebels to surrender.

The Syrian army, aided by Russian air power and Iranian militias, in 2018 regained control of the province of which Deraa is the capital and which borders Jordan and the Israeli Golan Heights.

However, Moscow assured Israel and Washington in 2018 that it would prevent Iranian-backed militias from expanding their influence in the strategic region.

The deal forced thousands of West-backed rebels to hand over heavy weapons, but prevented the military from entering Deraa al Balaad.

On Tuesday, dozens of Russian military police were seen patrolling the neighborhoods of Deraa al Balaad – the center of the first peaceful protests against the Assad family’s regime, which were fought by force before spreading through the country.

Russian generals presented local leaders and the military with a roadmap on August 14 to avoid any confrontation and tried to win over opposition, some of whom fear the plan will reverse the 2018 deal.

Moscow’s plan, seen by Reuters, offers pardon to ex-rebels but allows the army to gradually retake the enclave, while providing safe passage for former rebels who oppose the deal to leave for the opposition zones in northwestern Syria.

The Russian troops were accompanied by a group of former West-backed traditional rebels now integrated into an army division known as the Russian-commanded Eighth Brigade, residents said.

The enclave and other towns in southern Syria have continued to stage sporadic protests against President Bashar al-Assad’s regime, which are rare in areas under state control.