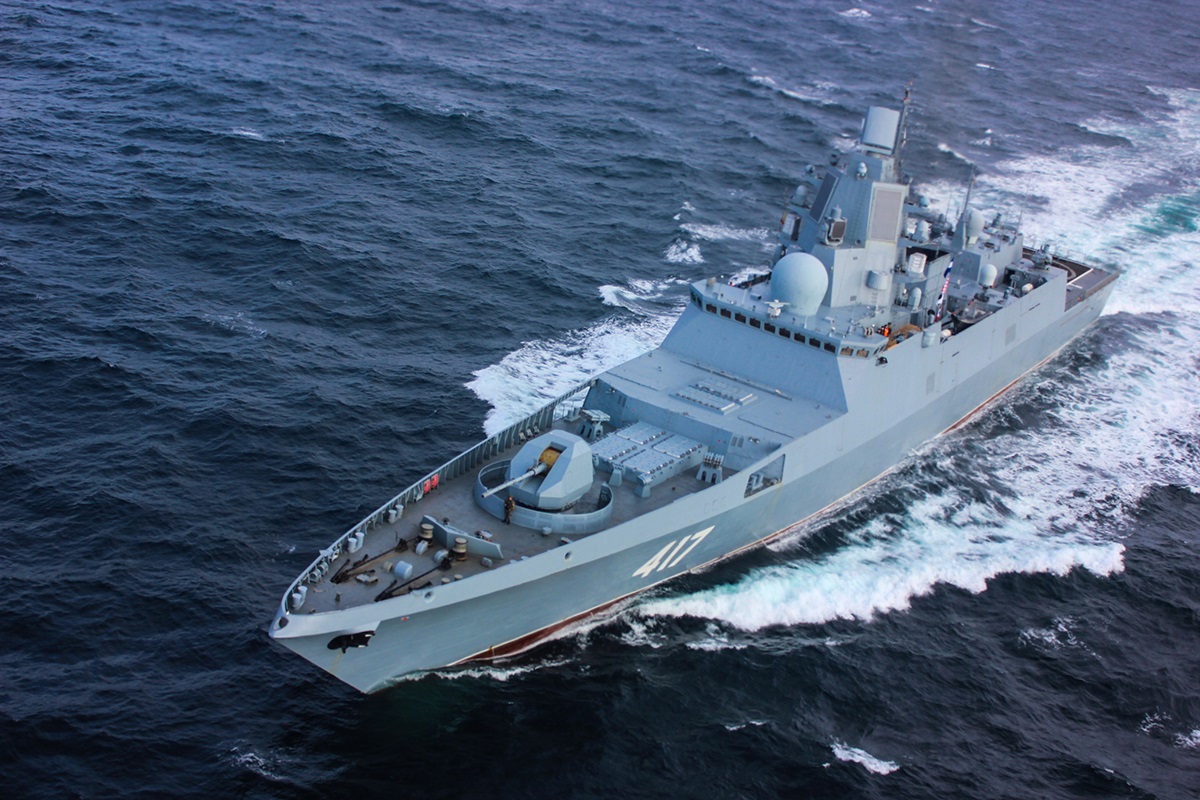 Russian Navy just showed off its most powerful warships

The parade opened, as it traditionally does, with Russian President Vladimir Putin inspecting a select group of stationary ships aboard his presidential yacht. This year’s programming opened with the Grad Sviyazhsk Corvette Buyan-M, belonging to the Caspian fleet. Next is the Ropucha class landing ship of the Northern Fleet Olengorskiy Gornyak, one of three active service ships of the original revision of the Project 775-class that entered service in Soviet-aligned Poland in the late 1970s. Ropucha-class ships were widely used during Russia’s intervention in the Syrian Civil War, transporting military equipment and supplies from the port of Novorossiysk on the Black Sea to Russian forces in Tartus. The Baltic Fleet Stoykiy, the fifth ship in Russia’s Steregushchiy class of modern stealth corvettes, also made an appearance. Moscow did not miss the opportunity to display the Northern Fleet Admiral Kasotonov, the latest frigate of Russia’s newest Admiral Gorchkov to classify. Benefiting from some of Russia’s most advanced surface vessel technologies, Kasotonov and others in its class will carry the upcoming 3M22 Tsirkon winged hypersonic anti-ship cruise missile. The Lada class Kronstadt submarine has made its comeback from previous editions of the parade. Although this class was originally slated to feature Air Independent Propulsion (AIP) technology, it was later reported that the first three Lada models—Saint Petersburg, Kronstadt, and Velikiye Louki– will have standard diesel-electric motors. Kronstadt is expected to be commissioned by the North or Pacific Fleet in 2022.

The remarks prepared by Putin noted that the Russian navy will be 325 years old next October, adding that “in the shortest possible time, Russia has taken its rightful place among the world’s major maritime powers and has come a long way since small boat from Peter the Great to the mighty ocean-going ships and nuclear-powered missile submarines of today. Putin praised Russia’s naval aviation, coastal defense systems and new hypersonic weapons among the best in the world. “Today, the Russian navy has everything it needs to ensure the defense of our country of origin and our national interests,” he said. “We are able to detect any underwater, surface or airborne adversary and inflict an unpredictable strike if necessary. “

Putin’s remarks were followed by the main part of the parade, featuring dozens of other ships. The procession included the Slava-class guided missile cruiser Marshal Ustinov, Udaloy-class destroyer Vice-Admiral Kulakov, and the new flagship Gremyashchiy class corvette Gremyashchiy. The maritime part of the parade was closed by a large foreign contingent from India, Pakistan and Iran. Pakistan sent the Zulfiquar flagship frigate, while India sent the INS stool Talwar-class stealth frigate. Iran, for its part, sent two ships: the Sahand Moudge-class frigate and Makran ex-oil tanker.

In addition to the main naval event in St. Petersburg, parallel parades were held in Caspiisk, Baltiysk, Severomorsk, Sevastopol and Vladivostok, as well as the Russian naval base in Tartus, Syria.

According to the Kremlin, about four thousand sailors, more than fifty ships and forty-eight naval airplanes participated in the main parade.

Mark Episkopos is a national security reporter for The national interest.