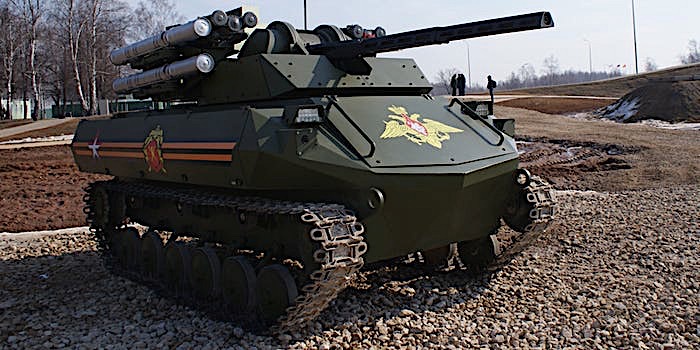 The news of a military unit ready to use strikebots sounds pretty scary, but it is even more so when it comes from Russia. According to an official statement, the Russian army has set up its first unit integrating Uran-9 robotic systems.

The Uran-9 combat robot is manufactured at the 766th Production and Technology Company in Nakhabino, near Moscow, which specializes in all types of robotic systems. After the visit of Russian Defense Minister Sergei Shoigu, it was announced that “the first unit with strike robots will be set up in the Russian armed forces to operate five robotic Uran-9 systems or 20 combat vehicles”.

Each robotic system is made up of four combat vehicles and a command post mounted on a KamAZ vehicle base. On the armament side, each Uran-9 incorporates Ataka anti-tank missiles, a 30mm automatic cannon and Shmel flamethrowers.

This first unit is an experimental unit, which will operate only on the premises of a military research center. In addition, specialized military personnel will be trained to operate the combat strike robots in one location.

Before Uran-9, there was Uran-6. Weighing 6 tons, with a speed of 9 mph (15 km / h) and equipped with 4 cameras that give it a 360 degree view, the Uran-6 is an ancient robotic system designed only to make its way through obstacles of anti-tank mines. and achieve full demining.

Uran-6 has already been used by the Russian army for several years. And it seems now is the time for the Uran-9, a strike robot, to take center stage.

“We plan to continue to expand the range of robots, which, of course, are already in demand in the military today. As expected, these will be heavy robots (demining) and everything related to the further development of scout robots, radiation and chemical reconnaissance, this applies to surface and submarine robots.», Declared the Russian Minister of Defense according to the Russian press agency Tass.