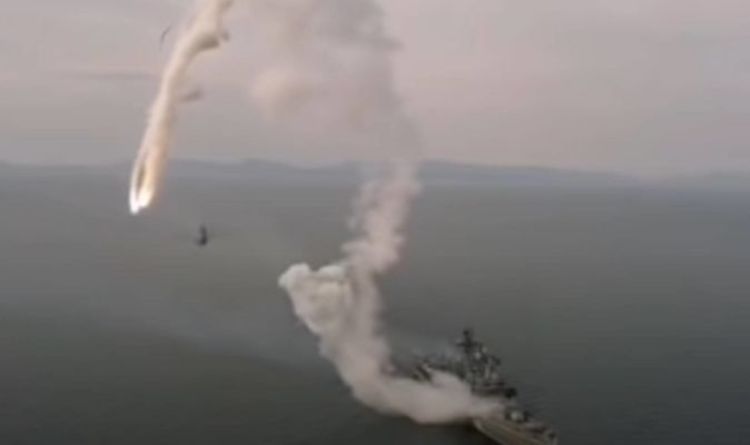 The footage shows a Udaloy-class destroyer launching a Kalibr-NK missile from its deck from an undisclosed location which quickly went awry when the missile malfunctioned in midair. A rocket thruster is believed to have come loose as the missile is suspended dangerously in the air for several seconds and at some point it looks like it will hit the ship. The missile then flies into the sea before exploding underwater in an embarrassing and potentially fatal military exercise for Russia.

The one-and-a-half-minute clip showed the rocket launching into the ocean and exploding underwater, leaving a large shock wave.

Russian media reported that no one was injured in the failed launch and the ship is now returned for repair.

Prior to launch, the frigate underwent an upgrade in Vladivostok in the Russian Far East to be equipped with land, sea and underwater combat capabilities.

The ship received several missile systems and advanced artillery as part of the upgrades.

Although there have been no confirmed reports of the location of the ship, it is believed to be possibly in the Black Sea where the Russian Navy has been tasked with conducting live fire exercises.

On land, more than 100,000 Russian troops carried out live exercises near the Ukrainian border as the world’s superpowers feared that a military conflict could erupt.

Russian President Vladimir Putin has since ordered troops to withdraw from the border after weeks of political tension and pressure.

President Joe Biden has contacted the Russian leader on several occasions to voice US concerns over military reinforcement at the border and has promised to chair summits between the parties involved.

“I responded in a direct and proportionate manner to Russian interference in our elections and cyber attacks on our government and our businesses and they did both of these things and told them I would respond and we did. . “